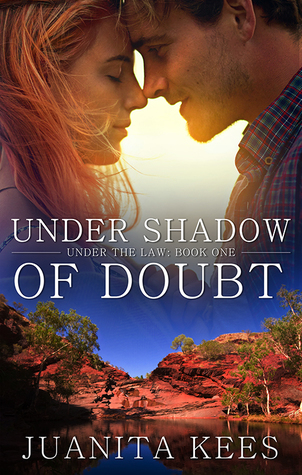 Title: Under Shadow of Doubt

Peta Johnson may be rich, famous, and adored, but it doesn’t protect her when the man she married turns out to be a monster. With her little girl missing, Peta will do anything to get her back — including returning to the small Western Australian town she vowed never to see again.

Jaime Caruso left his heart in Williams when he left to pursue a military career, but it soon shrivelled and died when he discovered the girl he loved didn’t love him enough to wait. Back in town to help his ailing father, Jaime struggles with the memories and plans to leave — permanently — as soon as possible.

But then Peta returns and Jaime gets swept up into the nightmare she is living. Feelings long buried soon bubble to the surface, and as they race to save the life of the daughter Jaime doesn’t know is his, they must decide if life — and love — really does give second chances.

This is my first time reading a book by Juanita Kees. The concept of a woman wanting to find her kidnapped daughter and being thrown into the path of a man she has always loved drew me in. When Peta and Jamie first encounter one another again after ten years apart, the sparks fly. They have chemistry and their backstory is solid. The reasons behind Bella’s kidnapping are revealed gradually and at the right pace.

Up until the start of the story, Jamie’s been running from a life his family have mapped out from him, but it’s never really stated what kind of life he wants for himself – he doesn’t really have a clear goal. He’s having to take on the family business because of his father’s failing health, but he is doing so out of obligation. I would have liked this part of the story to have been expanded on a little, because as it it serves more as a backstory and we never really see how this impacts on Jamie’s life all that much, or how it may affect his and Peta’s future.

There is way too much focus placed on the attraction between Peta and Jamie. I guess that shouldn’t really be a complaint given that this is a romance, but because the event that brings them together is a kidnapping and there is an element of danger involved, I did feel the emotion and inner turmoil the characters should have had was underwritten. After a while the story starts to feel repetitive in places, especially when it comes to the way the two main characters interact with each other physically.

Under Shadow of Doubt is a quick read with action, romance, and a satisfying ending. Worth a read. 3★

I received this book through Netgalley and Escape Publishing for an honest review.