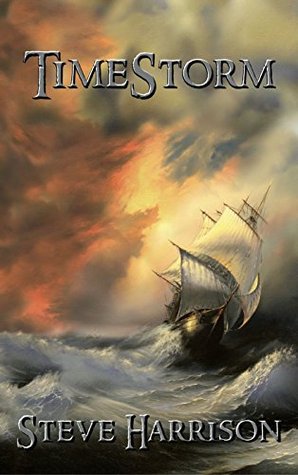 TimeStorm by Australian author Steve Harrison and has been on my to-be-read list for some time. I love reading books set in my home town, so I couldn’t pass this one up. On to the review…

In 1795, a convict ship — the Marlin — leaves England for the new colony of New South Wales in Australia. Nearing its destination, it encounters a savage storm but, miraculously, their battered ship stays afloat and limps into a Sydney Harbour dotted with many more lights than they expected to see, including some flying overhead.

Following the storm, former sailor and convict Rufus Redmond sees an opportunity to escape and overpower the crew. He rallies the convicts below decks and confronts the Royal British Navy crew. In the scuffle, the boat is set on fire. The convicts flee the sinking vessel and struggling ashore on a strange, rumbling watercraft. Desperate for escape, the convicts don’t care where they are, as long as they remain free. Until Rufus discovers the one man he wants dead, Captain William Cross, survived the sinking of the ship, and he vows to have his revenge.

The Royal British Navy crew in charge of the ship swim ashore in a different part of the harbour, where it has become quickly apparent that they are not when they are supposed to be, having arrived well into Sydney Harbour, circa 2017. The quick thinking of Lieutenant Christopher ‘Kit’ Blaney leads to a plan to return “home”.

“Perhaps we have died and this is heaven. Or hell.” Blaney wished he had not spoken.

TimeStorm is written in multiple viewpoints; so many I actually lost count. I didn’t mind as you can see inside the minds of each of the characters and different reactions to the events that occurred following the arrival of the convict ship in modern day Sydney Harbour — including modern characters that also encountered the convicts or the crew of the Marlin. A few viewpoints re-occurred more often than others. There is a clear “bad-guy” in convict Rufus Redmond and “hero” in Christopher “Kit” Blaney.

The conditions on board the Marlin as it sailed along the Eastern Australian coast were well researched and the language spoken by the ship’s occupants felt authentic. I was immediately drawn into the adventure and the storm that throws them off-course. TimeStorm captures the feel of modern day Sydney Harbour beautifully (I say modern day, because I doubt or hope it won’t change much in the next twelve months).

When the convicts are unleashed in a modern day city, it becomes a strange free for all, but in a good way. The action in this book is part swashbuckling and part modern day action movie. There were a few or more instances where I needed to suspend disbelief, but I loved the escapism this book offered and the pages quickly turned. The ending was both satisfying, in that it answered some of the early questions raised, and yet not at the same time. You know it’s good when you want to read more.