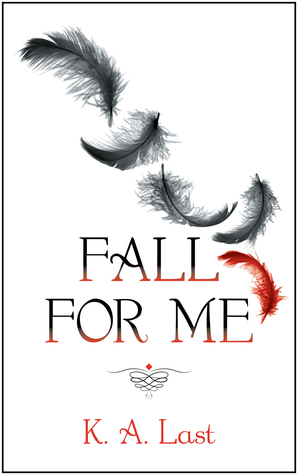 Fall for Me by Australian Author K.A. Last is a Young Adult Paranormal Fantasy (my classification).

Grace Tate is a Protection Angel and her twin brother Archer is a Hunter. By day they are teenagers, about to start their final year of high school, and by night they hunt vampires.

When a new girl, Charlotte, starts the school year with them, everything they think they know about vampires and angels comes under question. When Grace falls in love with a human, the Council reminds her of the rules and asks her to go against everything she thought she believed in. Unwilling to do what is asked of her, Grace finds herself siding with fallen angel, and long time adversary, Seth.

United against a common enemy, people will fall, some die, and some will be reborn. When the truth is finally revealed, nothing will ever be the same.

She was different, and in all my years I’d never seen a vampire like her.

This was a quick, fun, and easy read. The plot flowed smoothly and quickly. I did have a few issues on occasion when the chapter started in the recent past, rather than the current point in time.

My favourite character was Charlotte, because I suspected she may have been something other than what she claimed and that leant her an air of mystery the others didn’t have. Archer was a close second.

I didn’t love Grace; for a centuries old Protection Angel that knows the rules, she fell in love with Josh way too quickly and easily. She also did things that didn’t make any sense, like placing people in danger (and that was before a certain event mid-way through). I also questioned why Seth did the things he did and why Grace was sent to be a part of the Tate family in particular.

While I really liked the initial romance building between Josh and Grace, I didn’t like the way it developed towards the end, nor the introduction of a love triangle (although I suspected from the prologue where it would go). Grace’s naivety in the areas of love also didn’t help matters. However, I am not the target market for this book, and I’m not certain a teenager reading it would have the same issues that I did.

Despite the small problems, I thoroughly enjoyed reading about angels and vampires in an Australian setting. 3.5★