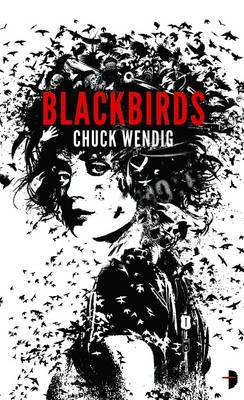 I was at the library, returning a book and helping my daughter pick up a Star Girl and my son a Pokemon, when I came across Blackbirds by Chuck Wendig. I figured I’d just finished a book, and while I love Chuck’s blog and have read lots of his writing advice, I’ve never actually read one of his novels before.  A blasphemy I felt compelled to correct. This was the only Chuck Wendig book in the library. I’m hoping there are others there, but if not, I shall have to search them out.

Miriam isn’t a sweet, caring, innocent character. She’s had a crap life and been dealt a strange blow in the form of her ability to see death in all it’s forms, just from a simple touch. She’s foreseen hundreds of car crashes, heart attacks, strokes, and suicides.

But when she hitches a ride with Louis Darling and shakes his hand, she sees that in thirty days Louis will be murdered while he calls her name. Louis will die because he met her, and she will be the next victim.

No matter what she does she can’t save Louis. But if she wants to stay alive, she’ll have to try.

Miriam goes and grabs Del’s pants and digs in for his wallet. Inside, she finds just shy of fifty bucks and a Mastercard. Enough to get her on the road, put a meal in her belly, move her on to the next town.

“Thanks for the donation, Del.”

I devoured this book in less than a day. What I loved about Miriam is that she’s not a typical hero. She has this strange gift, and while she tried to save people in the past, she quickly came to realise that fate is unchangeable. So she doesn’t try to change it, she goes with it, arriving at people’s deaths to benefit from them. Louis seems like a genuinely nice, caring guy, and for that reason she feels guilty that she ever met him, and that he will die because of her. I didn’t quite know how to feel about Ashley. I knew he was a player from the start, but he kind of had that cute bad boy vibe about him, until he didn’t.

I loved Miriam’s decision making processes throughout the book. The villains are particularly horrible people (slightly like caricatures from a super hero novel, but I can live with that) which make the pressure to save Louis all that much more enticing, especially with the thought in mind that she can’t save him. I kept trying to predict the ending in my mind – will she or won’t she?

There is language, violence, sex — not massively sexy sex — and language (did I mention the language?) in this book, and if you read Chuck’s blog you’ll see he doesn’t shy away from it, so why should his characters? What I found interesting, and what wasn’t explained in any great detail, was how Miriam went from the person she did in the past, to who she was now. We got some of her backstory, but it was kind of brushed over and didn’t explain enough for my liking. Because of that I dropped my rating by a star (I know, picky, especially since there are more books in the Miriam Black series).